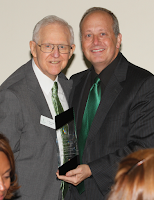 Everyone ought to have a Dr. Henry Gold in their life. My original and longtime mentor in higher education told me to study and complete my MBA after completing my BS in Chemistry. He told me to work for him as a graduate research assistant and then as a teaching GA. He said I should apply for a full time faculty position and as the Dean of the business college he hired me in my first faculty appointment in 1985. He counseled me to enroll at OU and complete my PhD. When I began preaching and pastoring bivocationally, it was Henry Gold as Church Clerk, and my other mentor, Pastor Gerald Tidwell who signed my license to preach.

I never planned my career. Henry Gold did.

He was my professor, my boss, my mentor, and friend. He was a dedicated churchman, deacon, husband, father, and grandfather. When I left his employ to take a dean’s position, he was as proud as was my own family. When I returned to Oklahoma a decade later to serve as OBU president, he was appointed as a Trustee and once again served as my boss. He was a gentleman, fisherman, well spoken, erudite, genteel, and kind—so very kind. He loved Jesus, became most animated when talking of the Lord, and today, Henry Gold met Him face to face.

The photo is from his last day of service as a Trustee of the OBU Board.
Posted by David Wesley Whitlock at Thursday, August 09, 2018 No comments: Links to this post