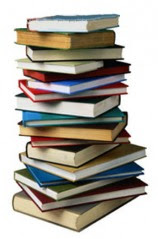 Bryan, Patricia and Thomas Wolf, Midnight Assassin: A Murder in America's Heartland. This real life murder mystery was later used as the basis for Susan Glaspel's short story, "A Jury of Her Peers," then later her play, "Trifles."

Douglas, Frederick, The Narrative Life of Frederick Douglas. Every person who has ever struggled to understand the sad history of slavery in the world should read this narrative, which is both a sad commentary on America's history of slavery and an inspiring story of an individual's ability to persevere in the face of persecution and rise above the indignities of others. A must read.

Edgar, William, The Face of Truth: Lifting the Veil. This scholar from Westminster argues that "it is always wise to seek God above all else," in his plea for readers to give biblical faith a hearing.

Eichwald, Kurt, The Informant. The book on which the Matt Damon film was based, this is the account of a complete breakdown in ethical business practices and the problems with too much of modern commerce. The story is told against the backdrop of an informant who himself is complicated and sometimes comical. Caution: language/transcripts of actual testimony and witness accounts very foul.

Flacco, Anthony and Jerry Clark, The Road Out of Hell: Sanford Clark and the True Story of the Wineville Murders. A haunting story of brutality and redemption, this is an emotionally difficult read that provides the back story of the Jolie/Eastwood movie, The Changeling. Warning: graphic descriptions of the horror that took place in the life and murderous rampage of the chief antagonist.

Jones, Larry, I Lost My Ball and Found My Life. Mr. Jones graciously gave me this book on a flight out of Dallas. A very brief novella, the book outlines the harsh realities of poverty in "third-world" nations especially its devastating effect on children. The title is awkward if not descriptive, but I would have chosen the title of "Slice."

Phelps, M. William, The Devil's Rooming House: The True Story of America's Deadliest Female Serial Killer. If you've ever seen the old Carey Grant movie, Arsenic and Old Lace (ironically a comedy), you might not know it was inspired by a real-life woman. Her name was Amy Archer-Gilligan, and this is her story told against the backdrop of the newly emerging business concept of caring for the elderly and infirm.

Preston, Douglas and Mario Spezi, The Monster of Florence. Having visited the famous city with Dana a few years ago, this book caught my attention. Set in the beautiful city of Florence, Italy, the authors weave the city's rich history and culture with the cold, hard realities of modern Florence and its pockets of crime and mankind's baser instincts. Caution: graphic depictions of the crimes and rough language.

Ritenour, Shawn, Foundations of Economics: A Christian View. This book by a close friend of mine is very readable even for the non-economist. Dr. Ritenour is a brilliant scholar of the Austrian school of economic thought, and presents economics from a biblical worldview. A must read.

Stott, John, Your Mind Matters. Embracing the life of the mind and the virtue of intellectual pursuit among evangelicals, this brief work by Stott is excellent. This should be on the shelf of all students and faculty engaged in distinctively Christian higher education. A must read.

Moreland, J. P., Love Your God With All Your Mind: The Role of Reason in the Life of the Soul.