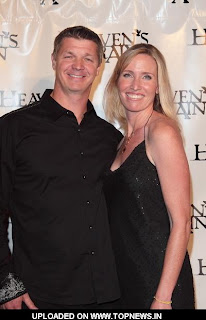 Heaven's Rain is a feature film that's just been released. The true story of Brooks Douglass and his quest to bring justice to his parents' murderers and his sister Leslie's rapists, the movie was written and co-produced by Brooks and he acted the part of his own father in the film. He and his wife Julea are pictured at the movie's premier release.

His father was Dr. Richard Douglass, an OBU alum who served as the Pastor of First Baptist Church, Putnam City, Oklahoma. Brook's mother was Marilyn, an accomplished singer. Having served with the Southern Baptist Convention's International Mission Board (IMB) in Brazil, the family returned to Oklahoma where Dr. Douglass eventually spent the rest of his life pastoring the Putnam City church.

When Brooks was 16 and Leslie was 12, tragedy struck that forever changed their lives. On October 15, 1979, two drifters, Glen Ake and Steven Hatch entered their home, hog-tied Richard, Marilyn and Brook, then took 12 year-old Leslie into her bedroom where both men raped her - Ake twice. Afterward, they robbed the family of less than $50, then shot all four, killing the parents and leaving the two siblings for dead.

The film however, is not so much a story of the crime (told in flashbacks), but a story of forgiveness. The film builds toward a powerful ending and is a definite must-see.

Both Brooks and Leslie endured not just the horror of the crime, but struggled through the emotional and relational consequences. Both have excelled in their respective careers, he as a state legislator, businessman, producer and actor; she as a professional educator. During his service as a State Senator, Brooks Douglass passed his signature legislation granting victim rights.

I remember well the murder and being struck by the knowledge that Brooks and Leslie were the same ages as I and my sisters were. Only a few years prior, we had been living in a small house in Wayne as my parents built our home on farmland outside of town. One day as I rode my bike around the corner I was confronted with police and a small crowd and learned that a boy about my age and his little sister, near the age of my sisters had been murdered by their mother who also murdered their father and then committed suicide.

Close to the same time of the Douglass murders, other crimes happened near Wayne that haunted our community and state. Roger Dale Stafford, his wife and his brother shot and killed the Lopez family on I-35 near Wayne. Lopez, on leave from the military to attend a family funeral, stopped to assist the Staffords posed on the highway as stranded. They killed Mr. and Mrs. Lopez and their 12 year old son. Eventually they robbed the Sirloin Stockade in Oklahoma City, rounding up the night shift including several teenagers my age, forcing them into the freezer and mercilessly murdering them. I remember one was named David, my age, who was working to fix up his old pickup truck. I thought of him often as I drove my own 1957 pickup back and forth to my first job.

Then, a local beautician who operated her shop out of her home was murdered by a high school student from Purcell when she gave him what he considered was a bad haircut. I attended the trials of both of the Wayne crimes, often skipping school to take my seat among the observers in the McClain County Courthouse.

In so many ways those events were intrusions of the reality of evil into my small-town perspective of a simple life that in so many ways had seemed idyllic. I often thought of those my age whose lives had been stopped and who would forever remain the same age in my mind, though I would grow older with each passing year. And I often wondered how Brooks and Leslie had dealt with their own pain. Now I know.

Now I can also count Brooks among my friends. Dana and I had the opportunity a few weeks ago to meet and host him and his wife for dinner, and hear his story first-hand. Tonight we screened the movie. The film was moving and inspiring and is a profound reminder of the power of forgiveness.

Pray for Brooks and his family, for Leslie and her family, and that God would use this film to point others to the message of Christ, to which Richard and Marilyn Douglass dedicated and gave their lives.
Posted by David Wesley Whitlock at Sunday, October 10, 2010