About 4,328 die every hour.
Over 72 people die every minute rejecting
any form of belief in Jesus notwithstanding Matt. 7:21-23. 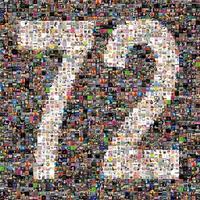 While we watch television.
While we work.
While we sleep.
While we eat.
While we email.
While we blog.
While we Facebook.
While we tweet.
72 every 60 seconds.
Don't be one of the 72.
Admit you're in need of someone to intervene. Turn you back on those things that separate you from God. Turn to God and ask forgiveness through Jesus the Messiah. Trust in His death, burial, and resurrection for your own forgiveness and right standing with the Father in Heaven.
John 3:16
Whosoever confesses and believes in the Son
will not perish, but will have eternal life.
72 believing 3:16 = a much sweeter sound at the gates of heaven.
*http://www.census.gov/ipc/www/popclockworld.html
Posted by David Wesley Whitlock at Sunday, October 17, 2010